HA RANG LEE FROM CANTABRIA, CHAMPION OF THE FIRST TEST OF THE SANTADER GOLF TOUR IN PEDREÑA 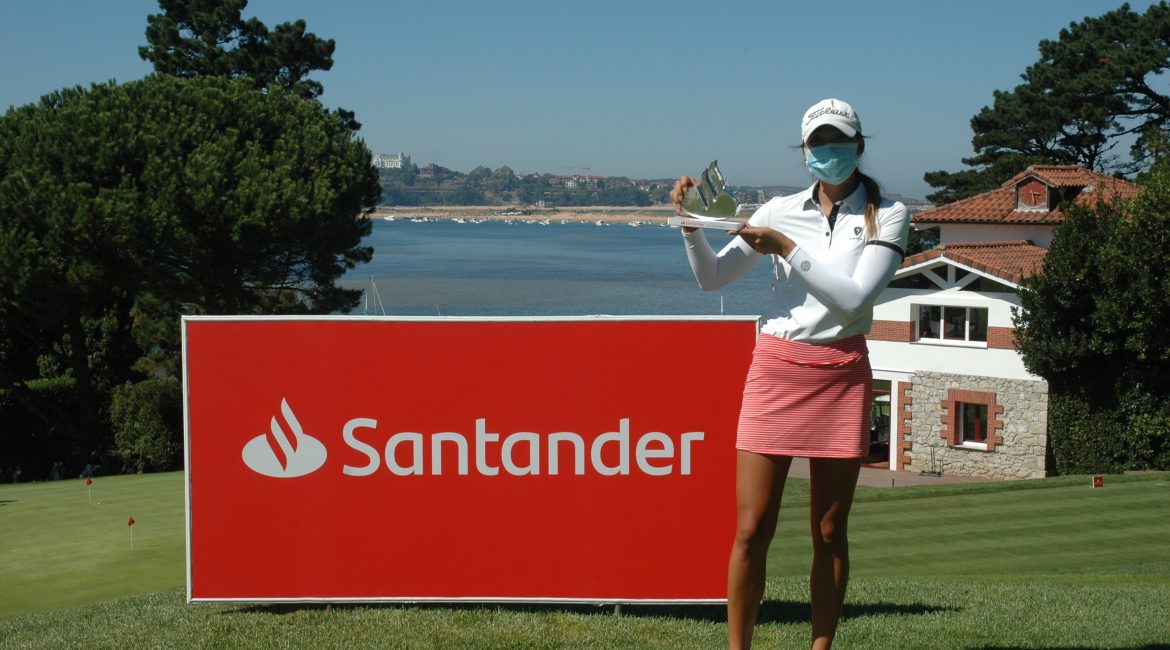 With a result of minus six total he took his first triumph as a professional
Luna Sobrón, second solo with a result of minus five total
Marta García Llorca, best amateur when finishing in third position (-4)
For the first time in Spain, the electronic card has been used in a professional tournament
Official website of the circuit
Interview with Ha rang Lee
The Cantabrian Ha rang Lee has managed to win the trophy thanks to a spectacular return of 66 strokes (-5) and has thus achieved her first victory as a professional at the age of 24. Lee started the second round four strokes behind the leader, but it was no impediment to quickly get to the top, thanks to four birdies in the first nine holes.
The classification underwent constant changes thanks to the number of birdies and eagles that were seen throughout the second round. Luna Sobrón, second with a result of minus five total, and Silvia Bañón and Marta García Llorca third with minus four total, constantly stalked the leadership.
For the second nine holes, the fight for the lead was still very much alive. Silvia Bañón took the lead thanks to three consecutive birdies on 10, 11 and 12. Luna Sobrón recovered from the errors of the first round with three birdies, but the strength and solidity of Harang Lee, with another three birdies for the nine seconds holes, decided the triumph for the player of Korean parents but born in Cantabria.
At the end of the test, Ha rang claimed to have been very comfortable throughout the tour: “I felt super comfortable, I had not competed for a long time and the truth is that I had a great time on the field, I had two very good games and I was very happy and that was the key ”.
In addition, she was very happy to achieve her first victory as a professional and nothing more and nothing less than in one of the courses that has seen her grow: “I feel super happy, because it is one of my favorite courses, it is super beautiful, greens perfect and it’s great to be able to win my first title here ”.
All the players highlighted the good condition of the field, and especially of the Pedreña greens, “fast and very homogeneous”.
The Santander Golf Tour ranking after this first round of the year is headed by the Cantabrian Harang Lee, followed by Luna Sobrón.
The next stop on the Santander Golf Tour will be at the Lerma Golf Club, where the Santander Golf Tour Letas Burgos will be held from October 15 to 16.
Classification Day 2
Facts about the field
The Real Golf de Pedreña was founded on December 29, 1928, the date on which the purchase of the 274 farms that initially formed the course was agreed. The initiative of the construction corresponded to H.M. Queen Victoria Eugenia.
Throughout all these decades the Cantabrian club has been a source from which dynasties have sprung up that have written the history of Spanish golf: Bedia, Carriles, Cayarga, Roqueñi, Rozadilla, Sierra, Sota and, of course, Ballesteros. The unforgettable Seve has made the tour a place revered by lovers of this sport, since every fan knows that the Cantabrian genius was forged in Pedreña.
The course, of course, has undergone modifications throughout all these years, and currently has 5,764 meters, par 70, but it has always been ensured by the commitment that the course is played as Harry traced. Colt in 1927. In recent times the club has added a short game area that includes a pair of bunkers and two greens.
About the circuit
The Santander Golf Tour is a firm commitment by Banco Santander to professional women’s golf and has the support of Santander Private Banking as a sponsor. Wilson Golf, Addictive and Estrella Damm are preferred suppliers. The Royal Spanish Golf Federation together with the rest of the territorial Federations through which the circuit passes add the rest of the essential support for the celebration of this tour.
The Santander Golf Tour has its own app and website: santandergolftour.es. For more information: prensa@deporteandbusiness.com
FACEBOOK: Santander Golf Tour
INSTAGRAM: @santandergolftour
TWITTER: @SantanderGolf
YOUTUBE: Santander Golf Tour